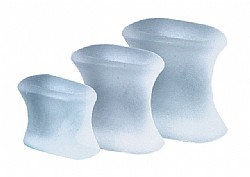 A bunion is a firm, painful bump that forms over a bony bulge at the base of the big toe. In most cases, the big toe joint also is enlarged and has degenerative arthritis. The toe also may be pushed toward the second toe (hallux valgus). Bunions tend to be inherited, but they also are common in the following groups. Women who wear high heels. People who wear shoes that are too narrow or too pointed. People with flatfeet. All of these situations force the big toe to drift toward the little toes, and this can cause bunions to form.

Causes
A true bunion or hallux valgus results from a drifting inwards of the big toe metatarsal from its normal position closer to the second metatarsal. The bunion is the head of this first metatarsal which produces the prominence on the inner side of the now wider foot. Tendons run circumferentially around the metatarsal and toe. They both move and stabilise the toe under normal circumstances. In a bunion or hallux valgus, with the shift/displacement of the first metatarsal these tendons no longer lie in the correct axis and in fact act as a deforming force, contributing to the bunion condition.

Symptoms
A bunion, also called a hallux valgus, is a bony prominence on the inside of the big toe, caused by a misalignment of the joint. The overlying skin maybe swollen, red and tender. Bunions are often painful and can limit what shoes you can wear.

Diagnosis
When an x-ray of a bunion is taken, there is usually angulation between the first metatarsal bone and the bones of the big toe. There may also be angulation between the first and second metatarsal bones. These angular irregularities are the essence of most bunions. In general, surgery for bunions aims to correct such angular deformities.

Non Surgical Treatment
Wear comfortable shoes that don't squeeze your toes together. Sandals are ideal in warm weather. Cushioning the bunion with a donut-shaped bunion pad sold at drugstores can prevent any direct rubbing against your shoes. Have your shoes stretched to give your foot more room or consider switching to footwear customized to relieve pressure on the affected area. Soak your foot in warm water to help lessen the pain after a day on your feet. Apply ice packs several times a day to reduce swelling of painful and inflamed bunions. Take aspirin or ibuprofen for the inflammation and pain, and try supplementing with anti-inflammatory herbs such as ginger and turmeric (these work more slowly than the drugs). See a podiatrist for specially fitted shoes or orthotic devices that may help. Sometimes, surgery is necessary. Seek a second opinion before scheduling any operation.

Surgical Treatment
The decision to have bunion surgery is personal and different everyone. While there are many reasons to have bunion surgery, the most common reasons include. Pain. Difficulty walking. Difficulty fitting shoes. Worsening bunion. Pain at the ball of the foot. Failed conservative measures. See Non-surgical Treatment. Some people have surgery simply because they don?t like the way the bunion looks. While some doctors may correct your bunion if it doesn?t hurt, you should be aware that permanent pain may occur after your surgery.

« Hammer Toe Surgery The Treatments And Causes Of Overpronat… »
Profile